Well, it was a hard fought giveaway, with  at least a hundred (okay, seven) people vying for a chance to win these gloves.  I took the nine entries (two of the seven met the requirements to have more than one entry), entered them into Random.org, and voila! 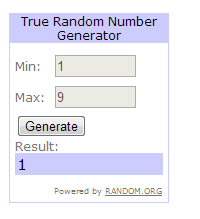 Email ThisBlogThis!Share to TwitterShare to FacebookShare to Pinterest
Labels: giveaway

So, I DID made some rainbow fingerless gloves.

And, they turned out pretty cute.

I made a bunch of pairs, and have already sold two of them, so that's been kind of fun.

There is a problem though.  See those two peach stripes on the gloves in the picture above?  I haven't been able to find that color and texture of yarn anywhere in town.  So, I was able to make several pairs of the gloves before my peach ran out, but my final pair only has one peach stripe instead of two.

I don't feel like I can in good conscience sell these, since they are about 1/2 an inch shorter than the others, and are missing that all-important (yeah, right) second peach stripe.  But, if I can't sell them, I can certainly give them away, right?  RIGHT.

If you want more entries, here how you get them:

And finally, for the most fun way to get an extra couple of entries:

I'll leave this giveaway open until next Monday at 10:00 p.m. (my time, which is mountain daylight) I'll draw a winner and post his or her lucky name!

So, remember how on my WIP list, I've determined that I need to go through this tote that I have and organize it?  In my mind I call it "the tote of forgotten projects".  Well, I finally went through it a week or so ago, and found a half-finished pair of creme fingerless gloves there, just waiting to be completed.

So, since I don't really like to just make one of anything, once I'd finished that pair, I made four more just like it.  Then I moved on, and made more black gloves.  Then I decided to make some brown gloves.  Next I think I'm going to venture into a rainbow pair, probably along the lines of the slippers here.   Then I'll probably be tired of fingerless gloves, and it will be time to go back to the tote and see what other mysterious forgotten unfinished beauties are lying there.

Oh, and when I was taking pictures of the brown gloves to list in the etsy shop, I went ahead and snapped a few like these, for a new avatar for the shop.  I was getting tired of the previous shot of me with the sun hat.  I know that I don't have to have my mug in the avatar, but I like being able to see the faces of the other etsy shop owners, so I guess it only makes sense that I like to have a representation of myself as well as my work in my own.

In other news, a photograpic genius neighbor and friend of mine recently asked me to make her a baby cocoon for a photo shoot she had coming up.  Having never made one before, and wanting something new, I was happy to comply.  I used this pattern from illbeyarned, and about half-a skein of Lion Homespun.  It worked up quickly and turned out quite nicely I think.  There are better pictures on Aubrey's photo blog here.

(I'd post the pictures here, but I'm not sure whether or not the baby's mother is okay with pictures of her son being used on the blog of someone she doesn't even know, and heaven knows I don't want to do anything that would make a new mother uncomfortable.  So, until I'm able to find that out, you'll just have to either take my word for how cute it is, or you'll have to take the time to make one extra click over to AHPhotography to see for yourself.)

Here's a shot sans newborn that I took in my backyard photo studio (a/k/a the top of my deep freeze.)

UPDATE:  Permission received!  Check these out! 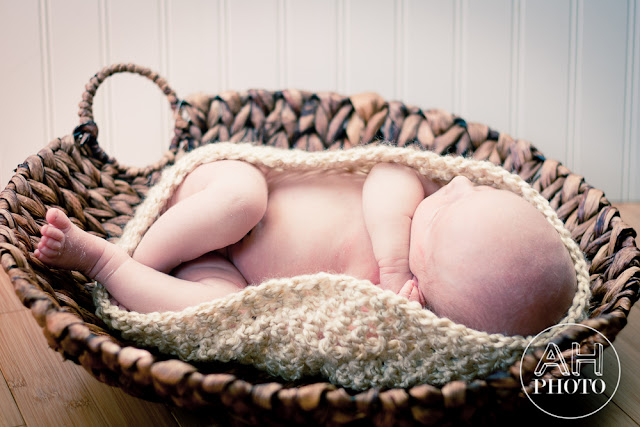 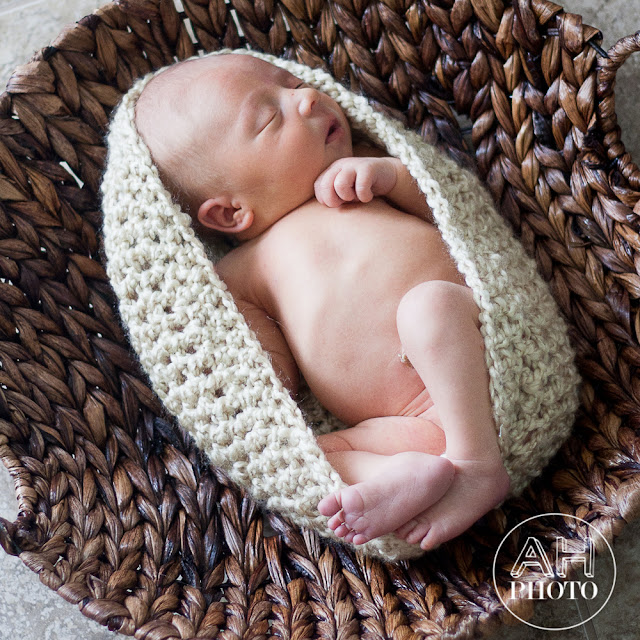 And that's what's up with me on the crocheting front.  On the life front I've been putting together birthday parties for my little girl (one family party followed by her first ever friend party), and doing some pretty time-intensive work with my church, and trying to squeeze out as much happiness as I can out of these end of summer/beginning of fall days.  Life is good.

Email ThisBlogThis!Share to TwitterShare to FacebookShare to Pinterest
Labels: fingerless gloves, photo props, the thrill of starting something new 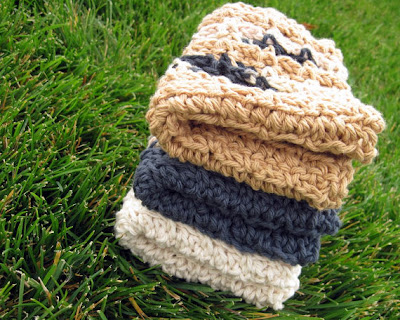 Back Burner, but still on the stove 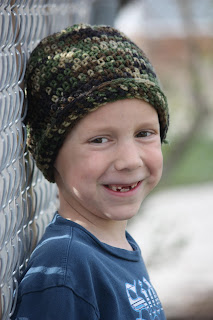 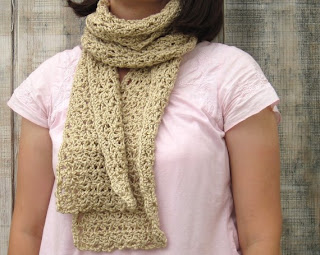 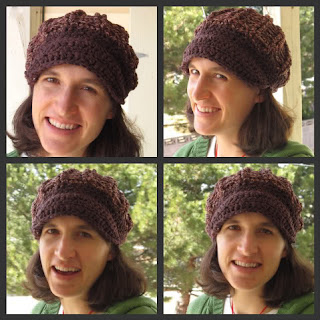 Posted by Charlotte at 8:20 AM No comments:

Well, at times I might have thought this day would never come, but I'm finally out of dishcloth mode for a bit.  I finished the last set a few days ago, and (in keeping with my WIP list), checked my WIP pile, which I keep in a clear storage tote in the craft room that I share with my 3-year old, making it a craft/toy room.  (It's a small room, essentially it's the cupboard under the stairs.)

The next WIP that I'm on to now is fingerless gloves.  I'm restocking some of the old   ones, and before I'm done, I'll be adding a few new colors and styles as well.

I've yet to find something that is more enjoyable to use in kitchen cleaning than a hand-crocheted or hand-knit dishcloth, sprayed with a little homemade Clorox Clean-up.

Posted by Charlotte at 7:46 PM No comments:

Here's the third of the three dishcloth patterns (but only the second pattern posted) that I discussed a little bit here.  I call this one "pick a pick", but I'm open to other names, it's just that none have struck my fancy quite yet.

At any rate, here are pictures, followed by the pattern.  Once again, my plan is to leave the pattern up here for the taking for the next little while, and then, when I have the pdf put together with the three patterns for the salutationscrochet etsy shop, I'll take this one down.  So, get the pattern while the getting is good, I guess!

Posted by Charlotte at 7:26 PM No comments:

Email ThisBlogThis!Share to TwitterShare to FacebookShare to Pinterest
Labels: dishcloths, patterns by Charlotte

Back Burner, but still on the stove

Posted by Charlotte at 3:26 PM No comments:


I've been venturing out and working on a few new dishcloth patterns lately.  My plan is to put together a set of three patterns, and when they're done and have been tested, I'll format them to be sold as a set in my etsy shop.  In the meantime though, I figure I'll put the pattern(s) up here to give y'all a chance to enjoy them if you wish, and also to hopefully get a few more people working on them and letting me know if there are bugs to be fixed.

Anyway, this is actually the second of the three patterns that I've made up, but the first that I've actually made into sets and photographed.

(Only the red/brown cloth is in the waterfall pattern.  The other two are a basic hdc pattern that I got off the back label of my peaches 'n creme yarn cone.)

Posted by Charlotte at 5:52 AM No comments:

Email ThisBlogThis!Share to TwitterShare to FacebookShare to Pinterest
Labels: dishcloths, patterns by Charlotte

Possibly the Most Rewarding Afghan I've Made

So, I haven't been doing a whole lot of dishcloths, sunhats, hairbands, slippers, or anything else lately.  Wanna know why?

(I know you can hardly contain your curiosity.)

A dear friend of mine got married last month, and I was madly working on an afghan to give her.  I (perhaps foolishly) determined to give a new pattern a go, a pattern I bought many many years ago, but hadn't gotten around to making yet.

Sixty-three different patterns for one afghan?  Sounds like a lot of work, and it kind of was.  But, it was fun work, and it was really intriguing to see how the afghan started to take shape the more squares I got finished up.

Here's a picture I took after having worked on it for about two weeks:

My friend requested a green/tan/ecru color palette, versus the green/ecru/rose palette in the pattern.

It took me about a month and a half to complete.  Here are a few shots of the finished product:

I did a more simple edging than the one called for in the pattern.  That's because I ran very low on yarn and I was down to the wire time-wise.

(And, by "down to the wire", I mean, I finished this baby up the day before the wedding!)

I'm really pleased with how it turned out, and I just love the thought of it being in my friends new newlywed house.  Is that silly, or just sentimental?  Either way, it is what it is.

Makes me want to make one for myself.  Maybe someday . . .

Posted by Charlotte at 2:29 AM No comments: