If only I could get caught up on dishcloths! 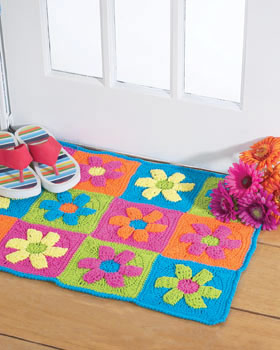 I love this flower rug.  Here's the pattern.

Posted by Charlotte at 6:21 AM No comments:

Email ThisBlogThis!Share to TwitterShare to FacebookShare to Pinterest
Labels: links to patterns

Is it Christmas already?

There's an absolute wealth of free crochet patterns here.
How fun is that?
Posted by Charlotte at 1:34 PM No comments:

Email ThisBlogThis!Share to TwitterShare to FacebookShare to Pinterest
Labels: links to patterns

I've been working on dishcloths, washcloths, and scrubbies lately.  Basically, I decided that it was time to consolidate all my cotton yarn (right now one tote, one large box, and two grocery bag's worth) into one tote and to do that by crocheting the additional into projects.  At this point I estimate that I'm about half-way done, and it's been so satisfying to see the nice stacks of dishcloths and scrubbies where there used to be bags of yarn overflowing.
As if that wasn't enough satisfaction, I woke up today to find myself in this perky summer treasury.  Sweet!

Posted by Charlotte at 6:02 AM No comments:

wrapped up in love

Of all the things I've ever crocheted, this is my favorite.

Here's the story:
When I was around ten years old, three of my best friends learned to knit as part of a learning activity in their religious youth group.  I was jealous.  I had my own religious youth group, and I asked my leader if she would teach me how to knit, but she didn't know how.  She did know how to do plastic canvas stitching, and so she taught me that instead.  I enjoyed it, and made tissue box covers (roughly like this one) for my mother and both my grandmothers.  I'm grateful now that the leader took the time to teach me, and for the time that we spent together, working on this project.
Still, I longed to knit.
My mom, seeing my sadness offered to teach me to crochet (her mother had taught her when she was around my age).  I was thrilled.  She gave me some different options as to what I might make, and I chose to make a poncho.  It took me four years to finish that particular poncho, but it started me on what I think will turn out to be a life-long love.
Years later, after I had graduated from college and was starting into my professional life, my grandmother picked up crocheting again.  She worked on hats mainly.  At the time LDS Humanitarian services (we're Mormons, my grandmother and I) were collecting and distributing ski hats throughout the world, particularly in the poorer countries.  So, grandma made hats--lots of them.  She still made time to work on an afghan from time to time though.
One weekend, when I was down visiting her, grandma pulled me aside, showed me the afghan she'd been working on, and asked me a question about the stitch that she was using.  The afghan had started to take on a different form, and we found that she had inadvertently switched stitches along the way and that was causing the problem.  Fortunately it hadn't been going on long, and so getting things straightened around was a pretty easy fix.
A few years after that, my grandmother contracted leukemia, and shortly after that (at age 84 I think) she passed away.  To say the least, it was a sad time for me, and for my cousins, aunts, uncles and parents.   I know most people feel this way, but my grandmother was an extraordinary woman, and to have her life end, even at a fairly advanced age was really rough on all of us.
Shortly after the funeral, my mother presented me with half of the afghan pictured above, along with a few skeins of matching yarn.  Turns out that as my aunts and uncles were cleaning out the house, they found this unfinished project and decided that I should be the one to finish it.  So, I did.
Grandmother and I had different crochet grips and tensions, and if I turn the afghan over on the backside, I can still tell where she left off and I began.
I love that.

Posted by Charlotte at 7:01 PM No comments: